During the seminar, homeopathic experts shared their experiences on the treatment of these rare and serious blood disorders through homeopathy. Addressing the gathering, the director of Advanced Homeopathic Medical Research, Dr. AK Dwivedi, said, “The rare blood disorders in the form of aplastic anemia is cured completely with homeopathic treatment”. While for Sickle cell anemia & Thalassemia giving desired relief to the patients
“The diseases have taken a more dangerous form than cancer and are affecting not only the patients but their entire family at various levels. This disease affects newborns to adults, young women, adolescent girls, and even older women. The initial symptoms of these diseases include lethargic feeling, tiredness, dizziness, shortness of breath, the feeling of weakness, pain in the extremities and backache, swelling, frequent fever or excessive bleeding during menstruation in women.” According to Dr Dwivedi, the symptoms of blood disorders are similar to that of many other diseases. However, not only the patients but sometimes the doctors also look at these symptoms by associating them with other diseases. Diseases like malaria and dengue are suspected in the very onset due to fever and reduced hemoglobin and platelets in the blood report. When the diseases are not identified after repeated investigation, then the specialist doctors suspect aplastic anemia.

If aplastic anemia is confirmed after a bone marrow biopsy then the Allopathy suggests two treatment methods: bone marrow transplant and ATG injection. A bone marrow transplant is a very complicated procedure that usually costs around Rs  20 to 40 lakh. Thus, it is very difficult for patients from middle-class and poor backgrounds to arrange for such a huge amount. Another option, ATG injection, is also a costly treatment amounting to Rs 6 lakhs  lakh to Rs 12  lakh and sometimes Does not give a permanent solution to cure the disease as the effect of the inject last for hardly three years. There are medicines available in the homeopathic field to deal with such types of rare blood disorders. Masiha Azam, a resident of Champaran District of Bihar, who got rid of aplastic anemia through homeopathic treatment of dr ak Dwivedi, said, “I went to the Fortis Escorts Hospital in Ranchi on November 20, 2018, for angiography due to cardiac problems. The blood investigation showed 60,000 platelets, and the hemoglogin was 10.5 grams.”

“The bone marrow biopsy revealed I was suffering from aplastic anemia. I was referred to Paras Hospital in Patna for treatment, which lasted for 40 days. My blood platelets were transfused every two to three days. However, one of my friends suggested starting homeopathic treatment. I came to Indore and started treatment at DR AK Dwivedi’s
Advanced homeo health centre & HMR PVT Ltd Indore. In just four days of treatment, my platelets increased from 18,000 to 27,000, and my hemoglobin increased as well. There was no Further need for blood transfusion.” At present, completely cured obsolete alright No such problems Not taking any kind of treatment since January 2020.

Meanwhile, the Ayush Medical Welfare Foundation and Advanced Homeopathic Medical Research Society carried out hemoglobin tests on about 100 normal women in Indore. Found very shocking result, about 48% of women were found suffering from anemia, out of which 26% of women’s hemoglobin was found below 10 grams and that 22% had hemoglobin above 11 grams, 6% had 8 grams hemoglobin, 8% of women had 9 grams and 3% had about 6 grams of hemoglobin. In the cases of anemia, there is a risk of serious illness due to negligence. Meet Jigar B Desai, a politician, Vice-Chairman of the Banaskantha District central co-operative Bank and an active social worker Kraft Serveware Honors Frontline and Essential Workers, Say They Will Never Forget Their Service through Their New Campaign Video 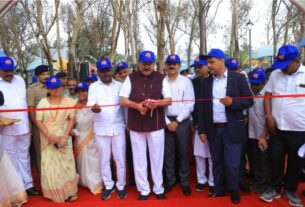