At London airport, GuruJi was received by the Sangat with love

Odessa [Ukraine] April 2: The tragedy of the war in Ukraine has made it necessary to evacuate the Sainchian/religious scriptures and Gutke/sacred prayer tablets from the port city of Odessa in Ukraine. This virtuous seva was critical as the residents of Odessa had been preparing to defend the city from an imminent attack after the siege of Mariupol nearby. This seva was made successful by the joint efforts of Sikh Defense Network-UK, Sikh Dharma International and the UNITED SIKHS. The Holy Scriptures are being respectfully brought into the United Kingdom, where they will be received by the Sangat and then taken to the National Sikh Museum in Derby, UK.

Simran Singh from Sikh Dharma International travelled from London to Iasi in Romania, from where he took a car to drive into the Moldovan capital Chisinau. The outskirts of the city were met by the members of the Ukrainian People’s Self Defense Organization.  The general advice given was to not travel due to the city being prepared for the assault. The entire sequence of the journey was an experience of grace and filled with Chardhi Kala and joyful anticipation of the darshan of the scriptures.

The scriptures and tablets were then collected from Odessa Gurdwara Sahib, following all the protocols and with utmost care. The scriptures will be taken for safekeeping by the National Sikh Museum in Derby.

“We are overjoyed that Guru Ji provided the blessing of retrieving the Sanchia at such a difficult time,” said Simran Singh, Global Affairs Advisor of Sikh Dharma International. “Coordinating on the ground with United Sikhs and the UK Sikh Defense Network in this mission was a game-changer and it is together that the panth is the strongest. Now, our focus must remain on the humanitarian crisis in Ukraine, where millions of people are in extreme duress, where food is in short supply, and where countless refugees are hiding or worse. United Sikhs is currently running convoys into Ukraine to evacuate Sikh and Hindu students, is feeding thousands of refugees on the entire sangat’s behalf at their langar hall, and is available to any person needing help. We are extremely grateful for their tireless work.”

Pritpal Singh Bhullar, Vice Chairman, UK Sikh Defense Network said,  “When we started planning this mission with Simran Singh, it was important that he had real-time knowledge of movements and travel routes to ensure his and scriptures’ safe return. The area is under military siege, with civilians evacuated, and we had to efficiently navigate military blockades, armoured vehicle columns, and pending bombardments. We are particularly grateful to the Ukrainian People’s Self Defense Organization from Lviv for coordinating Ukrainian vehicles and non-military drivers at personal risk and during their own tremendous needs. We are overjoyed that with Guru Ji’s blessing, this mission was a success.”

UNITED SIKHS has been involved in serving the emergency needs of refugees escaping the destruction of their country.  This includes distributing warm meals to eat, tea/coffee, goodwill supplies, a warm and secure shelter in a bitterly cold climate and conducting rescue operations along the Ukraine/Poland border for close to a month.

Gurpal Singh, UNITED SIKHS Head of Security Operations said, “Thanks to Vaaheguroo that Guru Saheb’s most sacred Senchiaa and Gutkas have made their way out. The collective approach of Sikh brothers and sisters in this operation with the Polish NGOs, Ukrainian Civil Authorities and their NGOs is a sign of a collective human spirit to save humanity-in war or peace. We recognize Simran Singh and the Sikh Dharma International Sangat in their collective effort to join forces and work as a truly global Team. Their humanitarian supply, evacuation, and food delivery seva for the Ukrainian people are deeply inspirational as well. This Mission is a tribute to universal protection of places of worship globally and we are thankful to the Sikh National Heritage Museum in Derby, UK where they will be placed.” 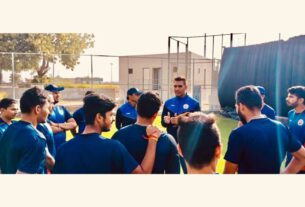 Ikhar Express Munaf Patel on the hunt for fast bowlers